Slide-in camper builder LOKI Basecamp introduces the Icarus, a trimmed-down take on its previous Falcon. The smaller profile means more trucks can carry it, but it doesn’t sacrifice much functionality.

LOKI made overlanding waves when it transitioned from storage unit conversions to modular slide-in builds with the Falcon. Its upscale aesthetics gave it clickable appeal, and its versatility made it broadly attractive.

The only problem was that it was heavy. At 3,000-4,000 pounds, it would flatten the springs on most standard trucks, especially when loaded.

Enter the Icarus, LOKI’s re-engineered slide-in that’s built smaller but doesn’t skimp on features. It addresses the weight issue, trimming down to a max empty weight of 2,500 pounds for the 8-foot build without skipping the amenities and four-season capability that define the Falcon.

“We designed the Icarus with a philosophy of no compromises,” said LOKI founder and CEO Pierre-Mathieu Roy. “We wanted a four-season unit that was light enough for easy driving both on and off road, and it needed to be strong enough to carry all of our outdoor toys on the exterior rack system.”

For all-weather, all-season comfort, the fiberglass shell gets R16 insulation. A Webasto unit heats both the air and water, and a 12V air conditioner cools it off.

A 2,000W inverter charges the 300-600Ah lithium battery bank that runs all the appliances and multiple outlets and charging ports. Rooftop solar panels back up the system, adding up to an additional 300 W of energy. 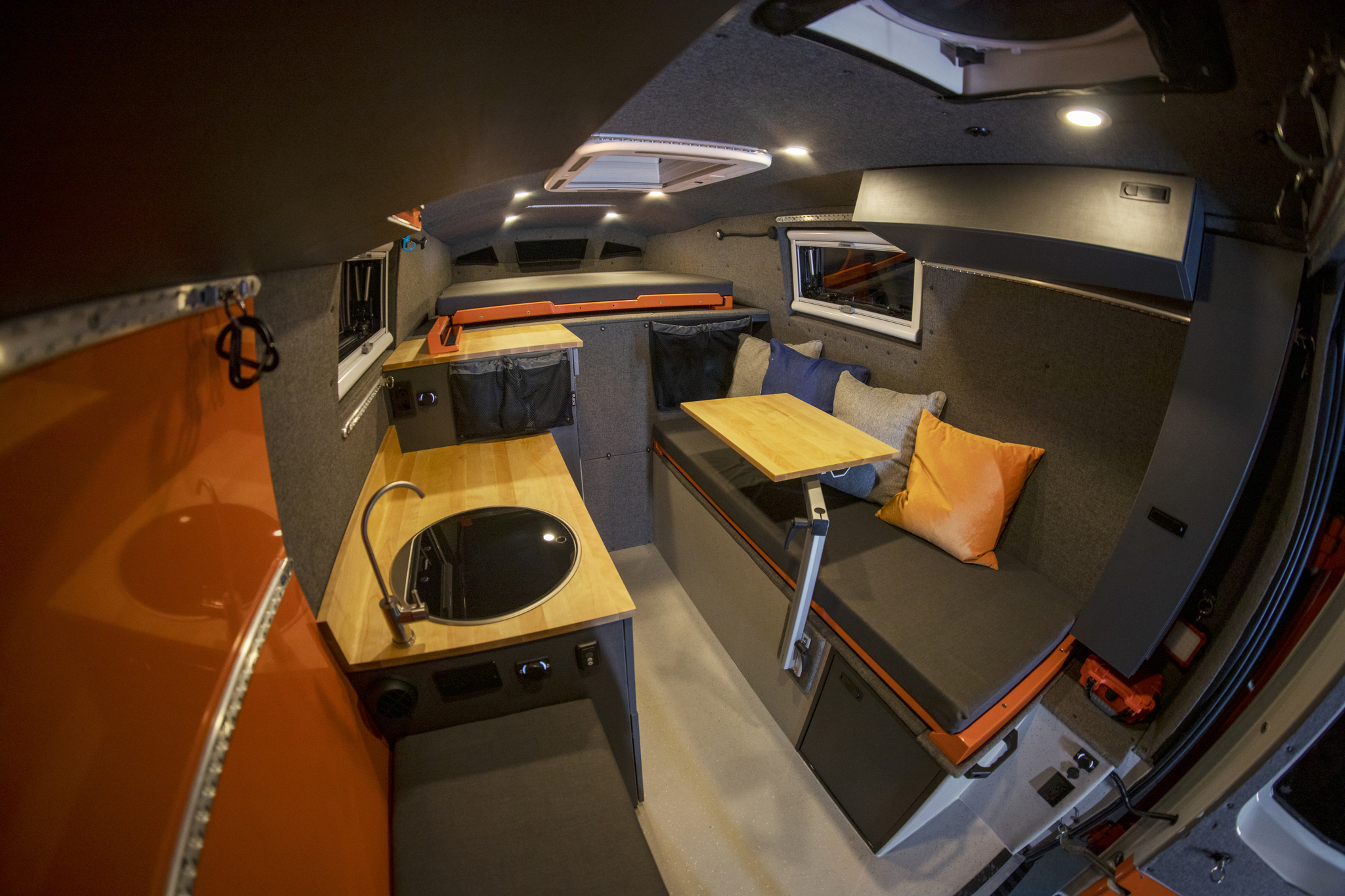 You should be able to turn night into broad daylight with the front light bar’s 48,000 lumens. LED lights on the sides and rear can also help keep you from stumbling around in the dark.

Like the Falcon, the LOKI Icarus also has a retractable awning and a roof rack to handle kayaks, bikes, etc. 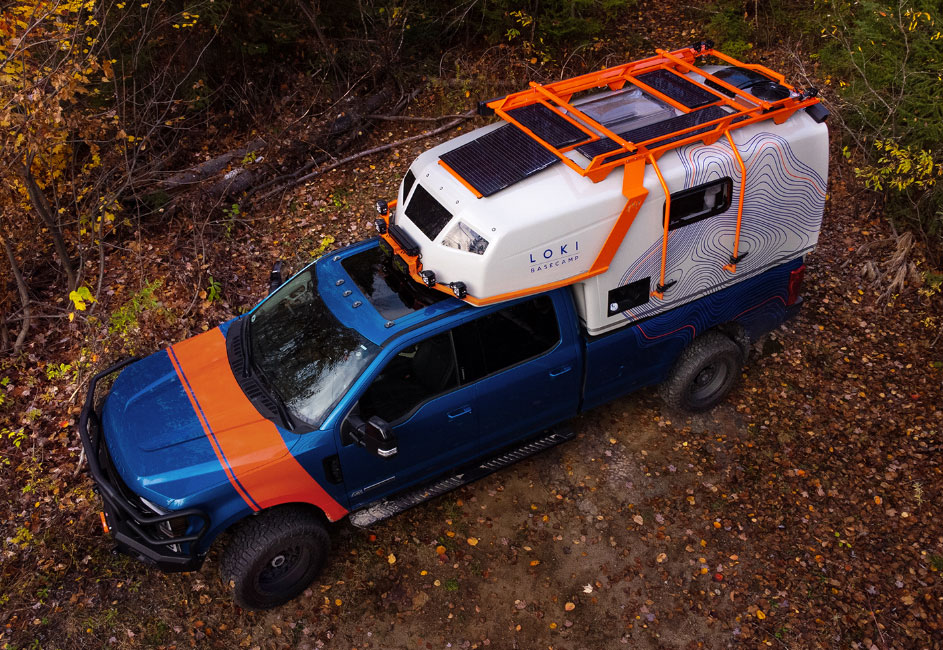 Later this year, the brand teases, customers will even get the option to mount a Red Tail Overland rooftop tent to the Icarus, transforming it into what the brand calls a “penthouse.” As is, a locking hatch facilitates rooftop stargazing.

The interior spares no expense either, with a full-size bed over the cab, hideaway portable toilet, reconfigurable table/seating area, kitchenette, and mudroom. The kitchen features a sink, induction cooktop, trash/recycling bins, and fridge; the mudroom does triple duty as a vestibule, shower, or extra seating. 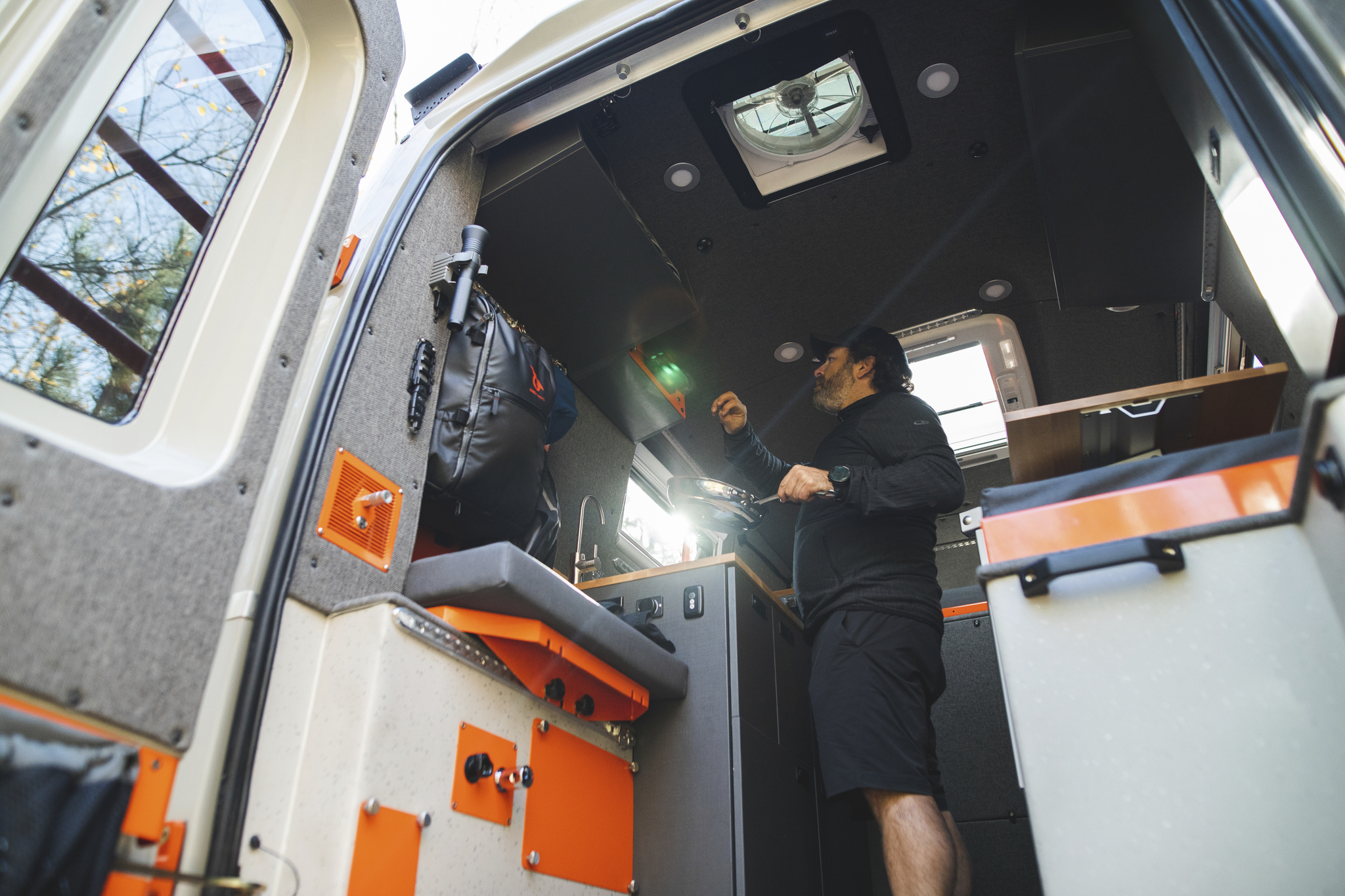 The LOKI Icarus comes in two models to fit trucks with either 6.5-foot or 8-foot beds. Custom options are too plentiful to list. Paint colors, upholstery materials, interior components, and various accessories outside and inside are all possibilities.

The hottest trend in the car-camping and overland world is the lightweight pop-top truck camper. These go-anywhere truck campers are ready for adventure! Read more…