HALLIE EPHRON: Each year Hanukah floats around on the calendar like a bird that's hit turbulent weather, and this year it lands practically on top of Thanksgiving. Tonight, in fact.

My family were proudly Jewish, but equally not religious. So I grew up with the Santa Claus and Rudolph and 'Twas the Night Before Christmas... but none of the liturgy; and not the faintest idea what Hanukah was all about (except that my Jewish friends had Christmas trees with blue and silver ornaments and lights... yes, it was a thing, we called it their Hanukah bush)... until I married my husband.

A good Brooklyn boy, Jerry had been bar mitzvahed, and no way were we going to hang a wreath on our door, even if it sported blue and silver spangles.

His mother gave us a menorah and I lit the candles and learned the story the Jews' victory over a tyrant king and the rededication of the Temple in Jerusalem. As the tale goes, a miraculously single-day supply of oil lit Temple's menorah for eight days.

And so tonight I'll light the first candle and remember. Tomorrow two candles, and so on for eight days. It's a small holiday, in the scheme of things. Traditionally no big gift exchange. The children  get Hanukah gelt -- chocolate coins -- and gamble spinning a dreidl.

Sadly Judaism has no full-out, over-the-top gift-giving bash to rival Christmas. But I love Hanukah for its quietness. There's something magical about lighting the candles and watching them burn down.

What I did learn about Judaism growing up was about food. Bagels and lox. Smoked fish. Rye bread and pastrami. Matzo ball soup. At Hanukah it's potato pancakes (latkes) fried in oil. Telling the story, lightning the candles, singing the prayer, eating the latkes, and watching the candles burn down. It's pretty magical.

Here are my #1 grandgirl watching the first candle burn, the first year she celebrated Hanukah. Her dad (not Jewish but a big fan of potato pancakes) made the menorah. 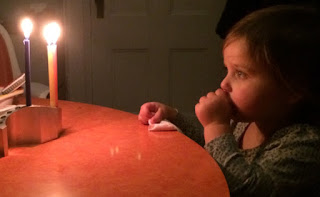 And here's my mother's recipe for potato latkes. They are truly fabulous and you don't have to be even a little bit Jewish to appreciate them.

The simplest ever potato pancakes
Serves 4

Caution – once you start preparing, don’t stop until all the potatoes are cooked. Grated potatoes left to stand will turn dark and yucky looking. They are best eaten right away.

1. Grate 2 LARGE (washed but you don’t have to peel them) russet potatoes (or 4 medium ones). I use the large holes on the grater - you get crisper pancakes if you use a hand grater instead of a food processor.
2. Dump the grated potatoes into a clean linen dish towel; over the sink, wring out as much liquid as you can. Squeeze, and squeeze again!
3. Dump the wrung-out potatoes into a mixing bowl; add an egg and a scant handful of flour. Mix.
4. Heat oil in a frying pan until a bit of potato sizzles when it hits the oil.
5. Ladel in one-tablespoon size pancakes into the hot oil. Flatten and cook until golden brown and crisp on one side, then turn and cook until golden brown and crisp on the other.
6. Drain cooked potato pancakes on paper towel. If they don't get scarfed up immediately, put them on a cookie rack in a warm oven until ready to serve.
7. Cook batches until all are cooked.
8. Serve with salt and your choice of apple sauce or sour cream.

DO NOT stop midway through this recipe. Uncooked potatoes left resting too long turn black and yucky looking. The children in your house will not eat them. 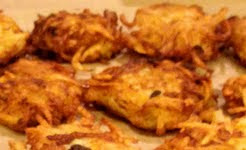