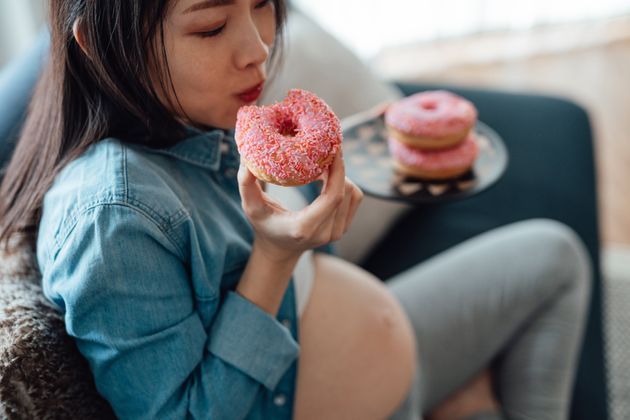 Pregnancy involves a whole host of symptoms that can range from serious to borderline comical.

Toward the latter end of the spectrum come the pregnancy cravings. Many expectant parents (and their partners) turn to Twitter to share the random foods and bizarre combinations they’ve found themselves suddenly wanting to devour.

We’ve rounded up some of the funniest and most relatable examples. Keep scrolling for 25 tweets about pregnancy cravings.

"Pregnancy is beautiful & natural" she typed at 4:30am, craving a Burger King Original Chicken Sandwich so badly she could kill a man.

Weird pregnancy craving of the day: Chinese food and mashed potatoes. At the same time.

Some pregnant women crave fruit or chocolate. My wife ate a whole rack of ribs. It was like watching a starving lion tear through a gazelle.

Satisfying a pregnancy craving is basically an orgasmic experience. Fight me.

Pregnancy craving-
I have the overwhelming urge to make a beautiful angel hair pasta dish with garlic butter shrimp.

Hubs and I are both allergic to shrimp and shellfish.

The baby is trying to kill me.

So far my only weird pregnancy cravings are alcohol and being less pregnant.

Due to an unfortunate pregnancy craving, my husband and children have renamed me. I now answer to "Cheeto."

My wife: I don’t really get pregnancy cravings.

Rapunzul was named for the greens her mother craved in pregnancy. I used the same logic in naming my boys Slider and Margarita.

I've been a good pregnant wife though. I haven sent #husbae out on any late night craving runs.

Mostly because he would laugh at me lol

Why tf does my pregnancy craving right now have to be mint tums 🥴MINT TUMS.

Me: “I’ve been craving this a lot lately. Better stock up.”

With pregnancy, the more unavailable… the stronger the cravings.

Not me craving Icheku (tamarind) by 7am and after hubby finally bought it, I gratefully patted it and went back to sleep. I’m sorry boo, it’s the availability for me🤧🤦🏽‍♀️.

These pregnancy cravings got me crazy!The baby said it want vengeance

Me at 15 weeks: pregnancy “cravings” are just an excuse to eat whatever you want & not feel guilty

Me at 36 weeks: if I don’t get a McDouble with no pickles & a medium fry with ketchup that has pepper in it I will give birth right the fuck now in front of god & everyone

I didn't realize how much I liked mango until I was standing over the sink, juice dripping down my arms, devouring one. #pregnancycraving

1671: midwife Jane Sharp wrote about unusual pregnancy cravings & women who have "longed to bite off a piece of their Husbands Buttocks."

I am having all the cravings today.

I want cheetos.
And rare steak.
And poutine.
And whiskey over ice.

Don't tell my midwife about that last one.