Black bean brownies are a special kind of flourless gluten free brownie, and this amazing recipe doesn’t taste like beans at all. Tasting is believing. 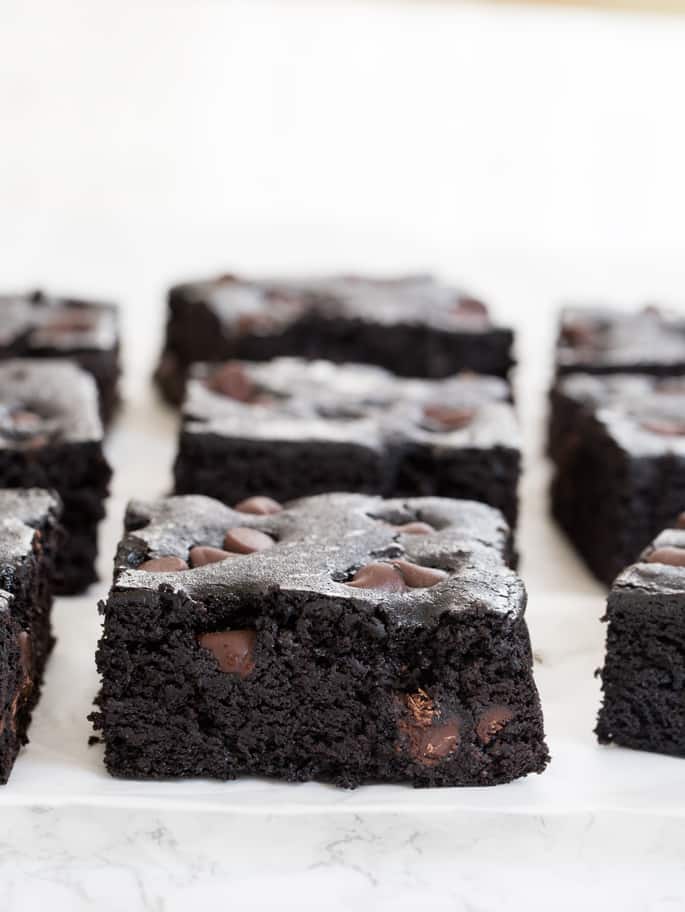 High in protein and fiber, these black bean protein brownies are made entirely with basic pantry ingredients that almost everyone has already. And all the equipment you need is a simple blender (otherwise, you’ll have whole black beans in your brownies!), a bowl and spoon, and a pan to bake it all in.

I think can agree that baking with beans mostly means tasting beans. But it doesn’t have to be that way! I’m about to show you that sometimes you can bake with beans and not taste them. Instead, you’ll just taste … brownies.

The only equipment you need is any blender (both my high-speed blender and my mini, nonfancy blender that I got for free ages ago work perfectly) or food processor. Just remember that the food processor won’t puree the beans quite as smoothly.

The only ingredients are canned black beans, eggs, oil, cocoa powder, brown sugar, vanilla, a touch of baking soda, salt and some brewed coffee (even decaf). That’s all. They’re tender as could be, plus rich and not-too-sweet.

The full recipe is below, but here are a few words about the key ingredients in these brownies that I think are helpful to keep in mind:

First, you’ll rinse and drain a can of black beans. Be sure you rinse them as well as you can without losing any of the beans. They may break, but we’re going to blend them, so it doesn’t matter.

Then, you can use a food processor or a blender to turn those beans into a puree. I usually use a blender, but generally it’s easier to get every last drop of puree out of the food processor.

A blender will mean a smoother puree. But even if your puree isn’t 100% smooth, you still won’t taste beans in the brownies. 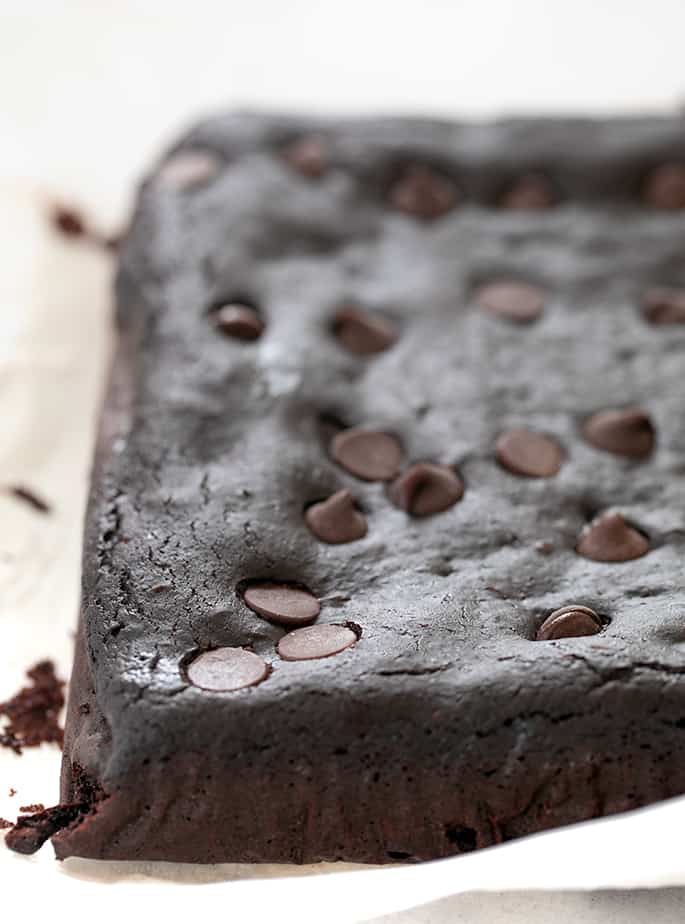 An unfortunate history of bean flour

When I first started baking gluten free, way, way back in 2004 (not a typo), my first “all purpose gluten free flour” was Bette Hagman’s bean flour blend. I blended it myself. It mostly worked, and I made sure that everything I baked had a nice, strong flavor to compete with the garbanzo bean flour.

Seriously it scarred me enough that I’m still building up to even trying aquafaba, even though I find it terribly intriguing. Vegan marshmallow fluff has to happen!

These naturally gluten free black bean brownies are truly flourless. But instead of melted chocolate, the base here is the humble can of black beans, which provides structure and tons of fiber without adding any bean flavor.

The same goes for my newest addition, flourless black bean cookies. Just like these brownies, they taste absolutely nothing like black beans. All you taste is rich, fudgy chocolatey goodness.

Now, I love black beans—in my burritos. And, say, on Taco Tuesday. But in my brownies? I was seriously skeptical. But also intrigued! 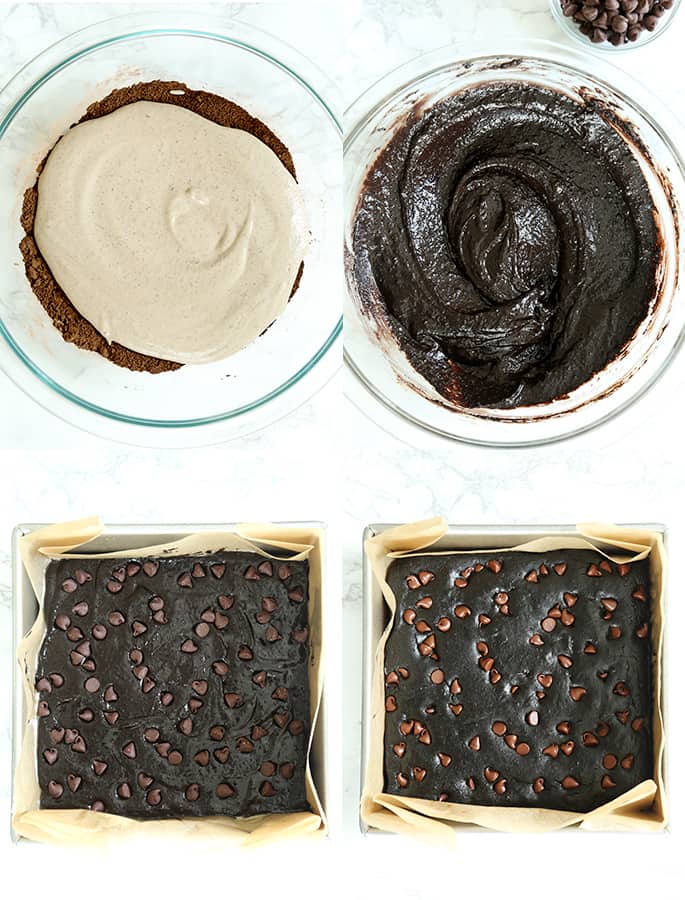 I assumed I’d do some recipe testing, and ultimately declare the entire concept of making brownies with black beans to be a disaster. I love it when I’m wrong like this.

These brownies aren’t fudgy, but they’re not cake-like in the traditional sense. The look cakey, but they’re actually really smooth in texture. They quite literally melt in your mouth, and become almost pudding-like in consistency.

How about the brownie taste?

You do not taste the beans in these brownies; all you’ll detect is that chocolate flavor. The vanilla extract, cocoa powder, and a bit of brewed coffee take care of that (no, you don’t taste the coffee either—just the chocolate!).

And these brownies still deliver a lot of fiber without any downside. This also means you can make moist and rich gluten free brownies—without any specialized flours or other ingredients. 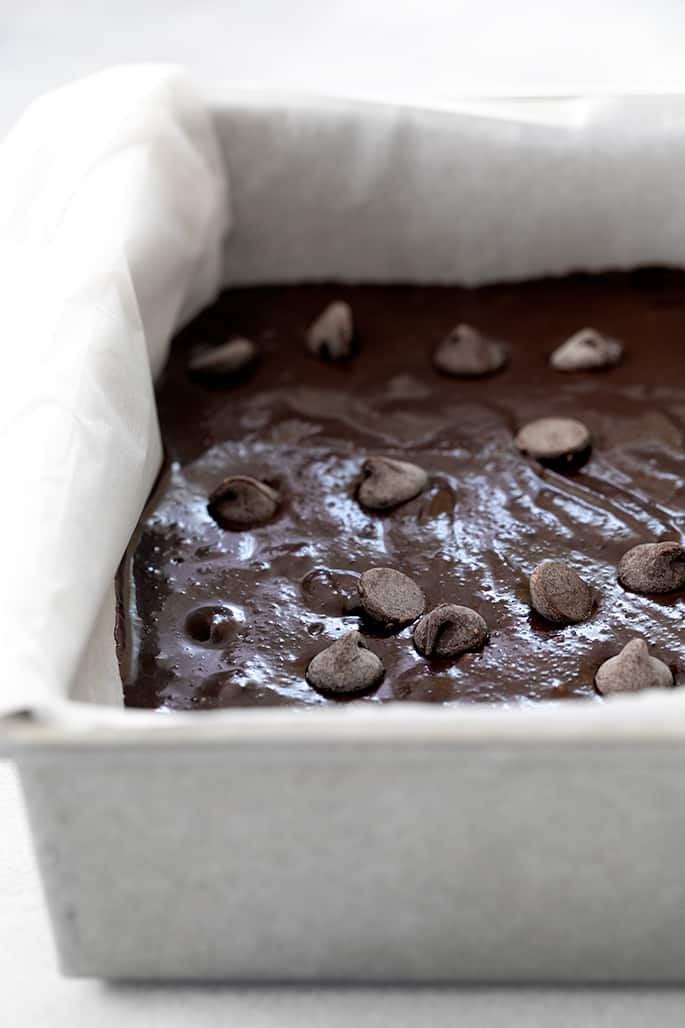 Use a blender for the smoothest texture

You can blend the drained and rinsed can of beans in a food processor if that’s all you have, but a blender will make the smoothest black bean puree. That means the smoothest brownie texture.

Choosing a pan for these healthy black bean brownies

Since these brownies are so tender and have no real flour replacement, they’re a bit more fragile—so I like to make them in an 8-inch square pan for that extra thickness. You can also use a 9-inch square pan, too, and just bake for less time. Be sure you’re using a light-colored metal pan or your brownies may burn before they bake all the way through!

No matter how long you bake your black bean brownies, they’ll need to be cool, or your knife will drag through and pick up pieces of brownie along the way. For the cleanest slice, place the cooled pan of brownies in the freezer for 10 minutes before slicing—and clean your knife after each cut.

Since the taste is rich chocolate, just like you’d expect, you really can serve them any way you would a classic gf brownie. Here are a few serving suggestions, but of course they’re perfect on their own:

The texture and taste of these brownies do really well in the freezer. Place them in a single layer on a lined baking sheet, and be careful with them as you load them into the freezer, though, since it’s hard to avoid breaking off some moist crumbs.

They never actually freeze solid, so you don’t even really need to defrost them unless you prefer them at room temperature. 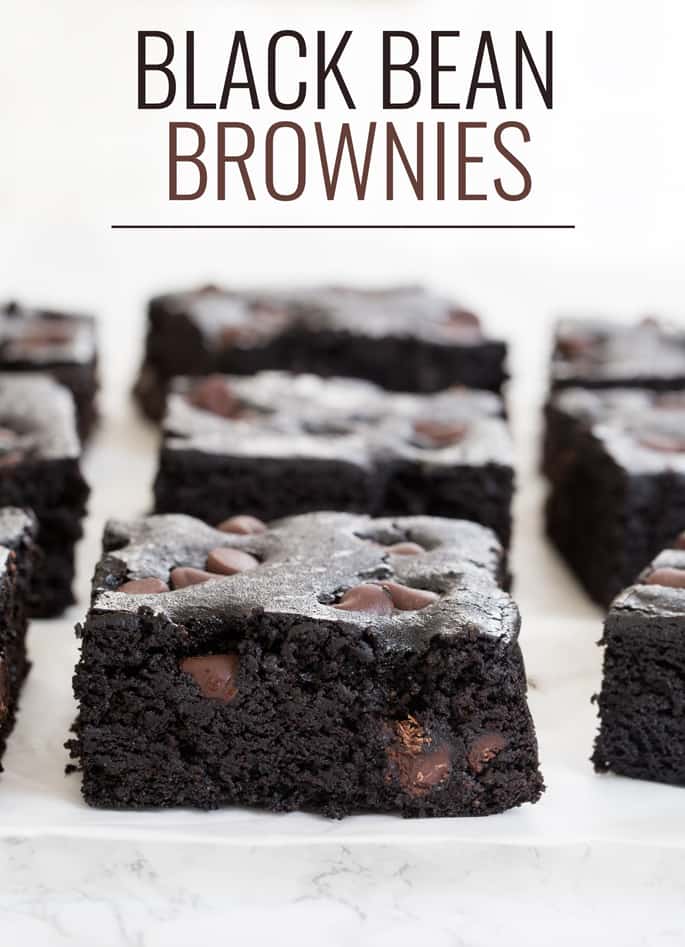 These brownies are already dairy-free when the recipe is made exactly as written. Just be sure to use dairy-free chocolate chips and you’ll be all set.

If you can’t have eggs, I recommend using my recipe vegan black bean brownies using boiled flax gel in place of eggs. They make a fudgier brownie, instead of a cakier one like this recipe, but they’re fully vegan and quite a nice, chocolatey recipe that’s lower in sugar and fat than this recipe.

Alternative sugars tend to leave baked goods a bit dryer than normal. I recommend adding an extra tablespoon or two of brewed coffee to get the batter to the proper consistency.

A neutral-tasting oil is all that you need here, so you have lots of options. I usually use grapeseed or canola oil, since I always have those in my pantry. You can also try peanut oil, but nothing with more than a very subtle flavor, like avocado oil. Avoid olive oil, since we don’t want a competing flavor. 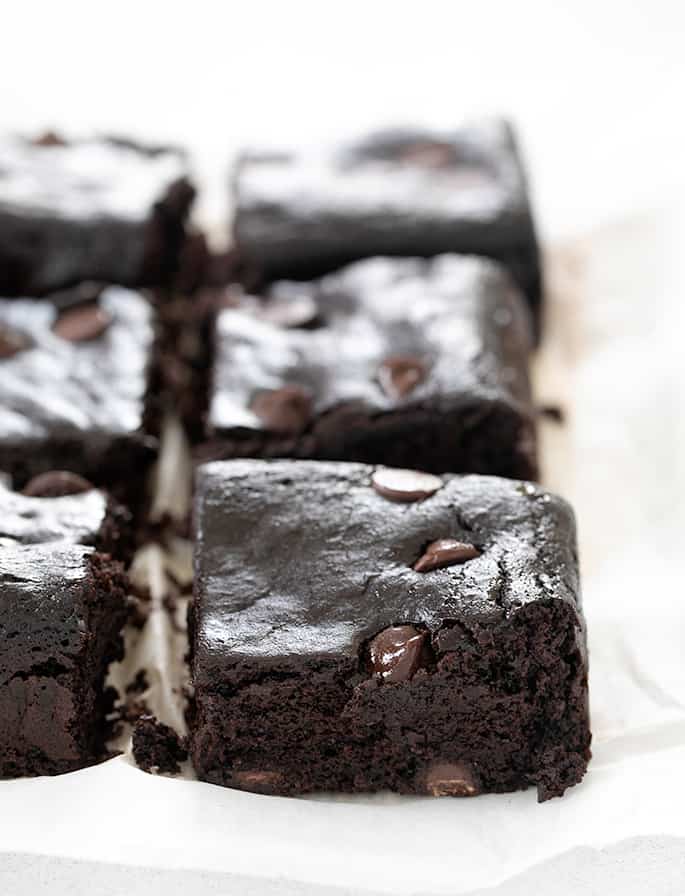 Some are! Some black bean brownie recipes are made using black beans in place of some ingredients, but include flour and most other classic brownie ingredients. This recipe is truly flourless, so it’s safely and naturally gluten free.

Yes! I’ve included (estimated) nutritional information in the recipe card below, so you can see how much fiber and protein you’ll find in these brownies—and how little fat compared to a classic brownie recipe. They still have sugar, though, and oil, so they’re not truly health food.

Why should I put black beans in brownies?

These brownies, made with black beans instead of any sort of flour, are useful in a few different ways! They’re naturally gluten free without the need for an alternative gluten free flour blend, which means that they’re not only less expensive but more accessible, making them perfect if you’re a beginning gluten free baker. Plus, they’re healthier than “regular” brownies.

Can I add chopped walnuts to this recipe for black bean brownies?

Sure! Try replacing some (optional) chocolate chips in the recipe with chopped walnuts. Resist the urge to pack these brownies with mix-ins, though, because they’ll probably sink to the bottom.

Can I make these easy black bean brownies without coffee?

Sure! The brewed coffee is only added to enhance the chocolate flavor from the cocoa powder, and you don’t taste it. You can use decaf coffee, or just replace the liquid with any sort of milk, or even water. The chocolate taste will be a little bit more subtle.

Can I make black bean brownies with brownie mix?

Can I use fresh beans in this black bean brownie recipe?

You can use dried black beans that you’ve cooked fully at home, but only if you cooked them in plain water alone. If they’re made with stock, stick with the plain black beans from a can.

Can I use different beans for this gluten free black bean brownies recipe?

I’ve only made this particular recipe specifically with drained and rinsed cooked black beans, but I have a really similar recipe for flourless blondies made with white beans.

How can you tell that these black bean chocolate brownies are done baking?

The cake tester/toothpick test isn’t reliable in this recipe, since it will come out nearly wet even when the brownies are done baking. Continue to bake your brownies until the top is set and it springs back when pressed gently in the center with your forefinger. And when you shake the pan gently from side to side, it doesn’t jiggle at all.

If you’re not sure that your brownies are done baking, lower the oven temperature to 300°F and continue to bake for another 3 to 5 minutes. Originally published here on the blog in 2016. In 2020, video and some text added, recipe unchanged; in 2022, more text and one photo added.