Guess we were lucky, the storm missed us.

Most of it moved to the South and ran up through Illinois and southern Wisconsin and over into lower Michigan.

All that we got was a light amount of snow that made things look pretty and fresh and clean again. Just a couple inches.

Maybe we will get some more later on again tonight, but only 1 to 3 inches.

We took a run up to Menards and grabbed some more supplies for replacing the electrical outlets and switches. He went through a lot of wire and is changing outlets faster than I expected. Yanking out old cloth covered wires and metal boxes, replacing with good non-conductive plastic boxes and new grounded outlets and good grounded wires. 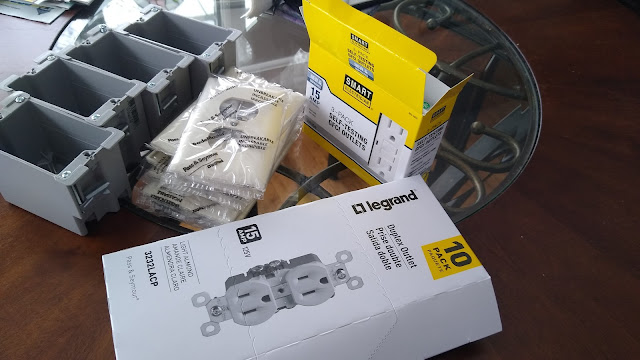 Steve of course is going a lot faster than we originally planned with this project. We were only going to do one or two each day. But he has made a "job" out of it. Up and at em at 6:30 a.m.

As of now he has all of the main floor outlets and switches changed over. The only thing left now will be the ceiling light fixtures once he gets up in the attic. Won't do that till things warm up more this spring. 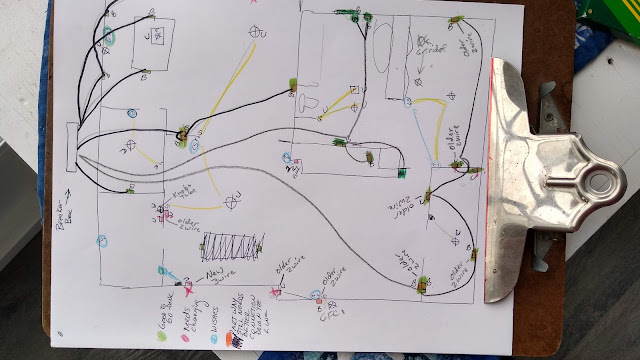 He also rewired the 4 connected light fixtures in the basement. Now if we enter a basement from either entrance, he has a three-way switching setup to turn on all 4 the of the lights. That way if we go down using the scuttle hole entrance and turn them on, but if we decide to exit the basement through the full-size door outside, we can turn them off without having to double back like we do now. Good thinking, Stevio!!
~~~~~~~~~
Now for that "Sinking Feeling" I mentioned in the title... Lol we are okay, just a cute play on words.

While we were at Menards, I wandered down the kitchen sink aisle. I wanted to double-check if there were any garbage disposals on sale. We don't have one in this house, and I did have one in each of our last two homes, and I kind of miss it.

Oh Lord, keep me out of home improvement aisles if I don't have the budget to spend on things!!!

I SAW THE SINKS!
PRETTY
SHINEY
NEW
KITCHEN
SINKS!
I am not entirely happy with the sink that we have currently in the house. It's a perfectly fine sink and does it's purpose. But it's a two bowl shallow stainless steel sink. If I turn the water on too fast it splashes out at me. 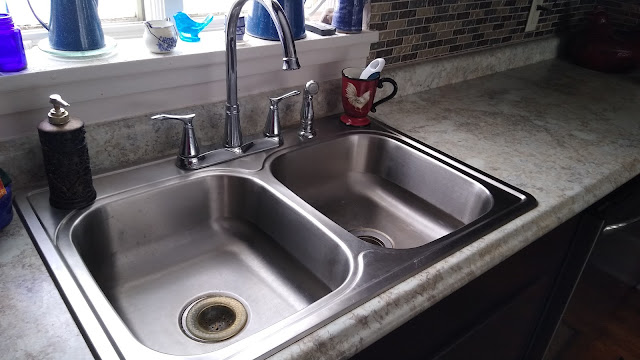 Also the cold faucet handle
is located way too close
to the sprayer attachment. 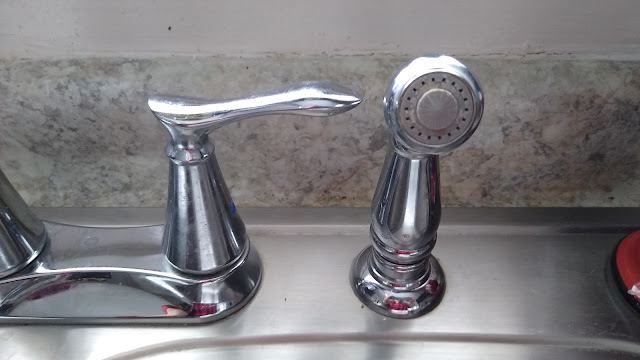 We don't ever do dishes in the sink. We have a dishwasher. So it's mainly used for rinsing plates, washing vegetables, food prep, canning vegetables, washing the large things like roasters, the inner liner of my pressure cooker, or my large baking sheets. The two bowl design is kind of limiting the usable space, plus the lack of a garbage disposal is frustrating.

Like I said, it's okay and perfectly fine to use. But for some reason, after walking down that aisle, I found the Sink Of My Dreams!!! 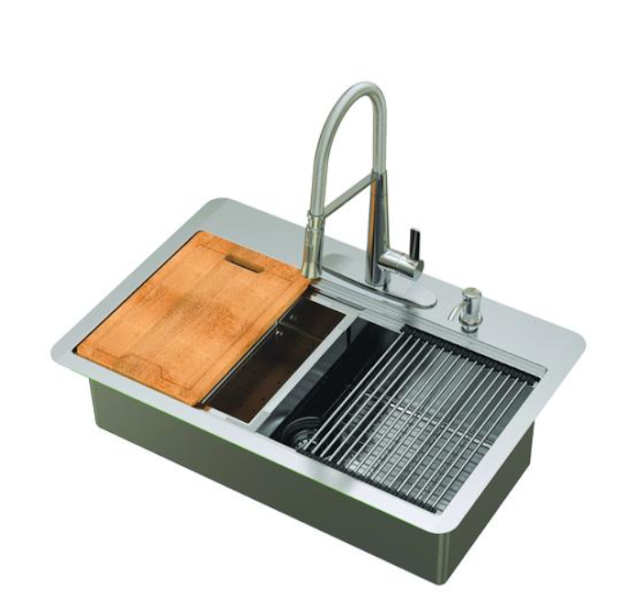 Yippee Skippee!
It comes as a complete unit with the faucet, the cutting board, the roll out rack, the drying rack, the bottom grid, the rectangular rinsing basket, drain strainer, and soap dispenser. 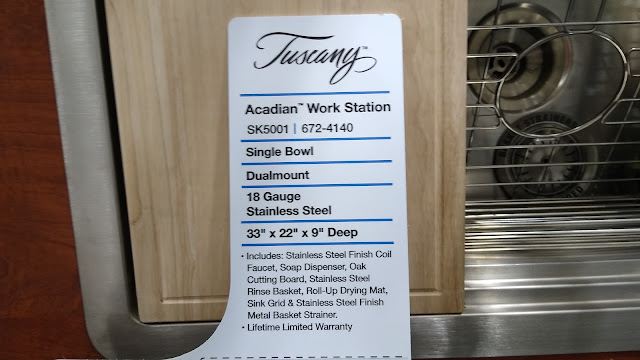 Right now it's on sale for $50 off. It's on sale all week so I am going to see how much I can convince my own mind and our budget as to whether or not we need this.

This month is also property taxes and we just made it through Christmas without going into any debt. We try to be sensible and practical. But on the other hand, we mostly cook at home, rarely go out to eat, and this sink would be a great veggie prep area with a garbage disposal added at the same time. Hmmmmm?

Steve did mention the sensibility of preparing the wiring underneath the sink for a garbage disposal while he's doing the rest of the rewiring. So that makes sense too.


We will see what happens...

~~~~~~~~~
Yesterday we took care of a silly little Packer Backer Fan who came to spend some time with us. Her daddy dressed her up in her adorable little Packer Fan clothing. He made this video of her "reading" her book about No More Monkeys Jumping On The Bed.

He was called into work, so she came to hang out and watch the pregame festivities on tv. She is such a smart girl, she said the football players on tv were wrong. They were red and blue.... not green! 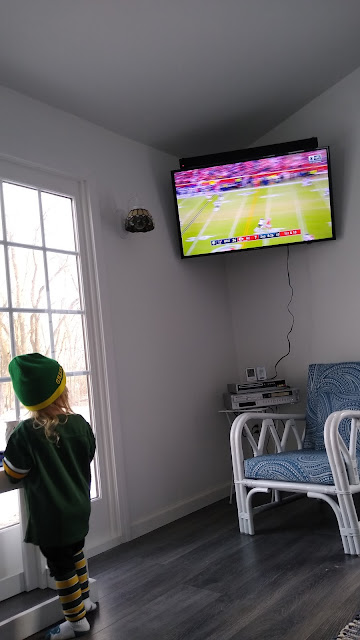 (the Packers weren't on yet, it was the Chiefs and the Texans)
We had a little pre-game tailgate meal of her choosing:
Hot dogs, carrots, a boiled egg,
some shredded cheese and applesauce! 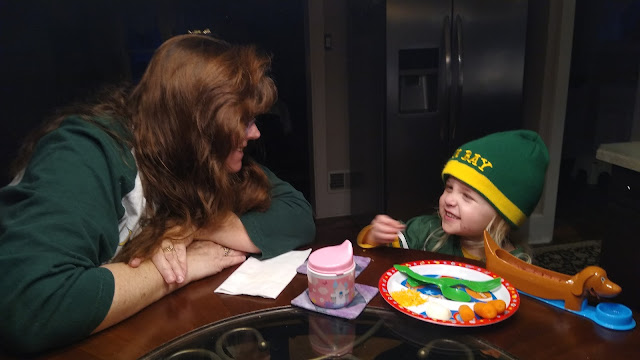 In the evening, she went back by her parents while we watched the actual game. Of course, the Packers won and are on their way to the final playoffs this upcoming weekend to determine who goes to the Superbowl.

Her Mommy and big sister Chelsea were out of town at two Cheerleading Tournaments. Chelsea is on a Cheer Dance Team and is only 10 years old. Those girls work hard and rehearse and practice a lot of hours to get where they are. They did a great job and won FIRST PLACE in their divisions at both tournaments~ 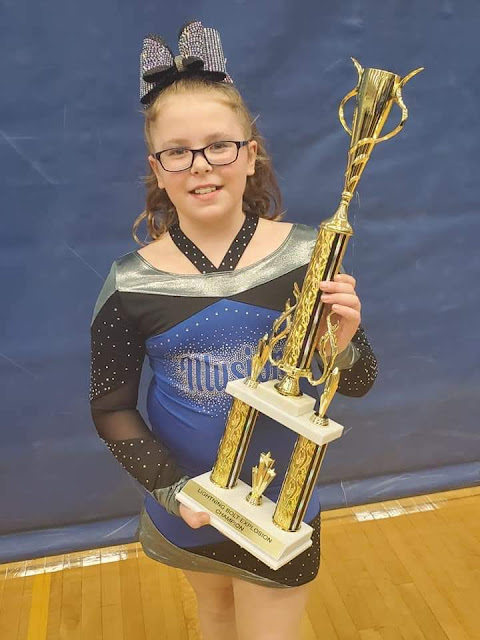 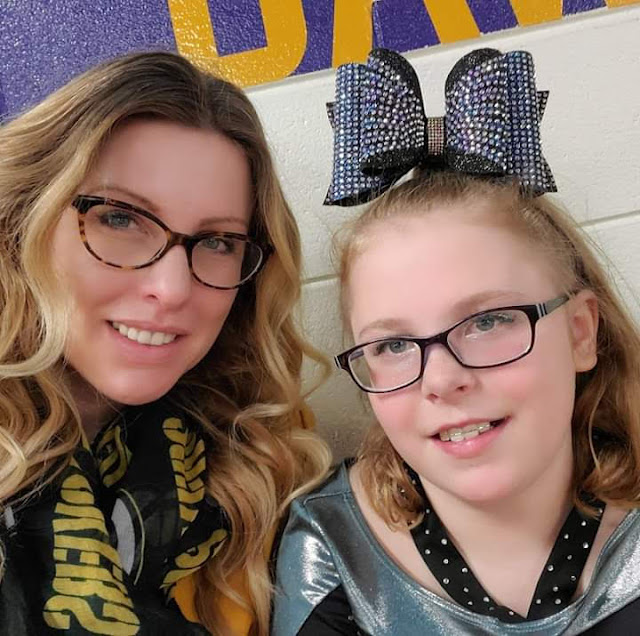 ~~~~~~~~~
I worked a little bit on my quilt today on the big frame. It's coming along well and I'm totally enjoying working in my she shed on my fun stuff. 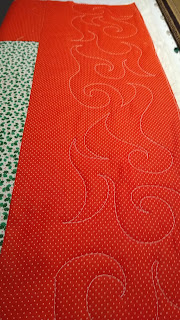 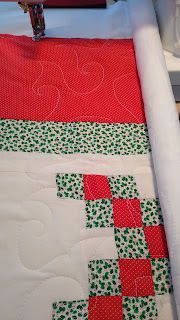 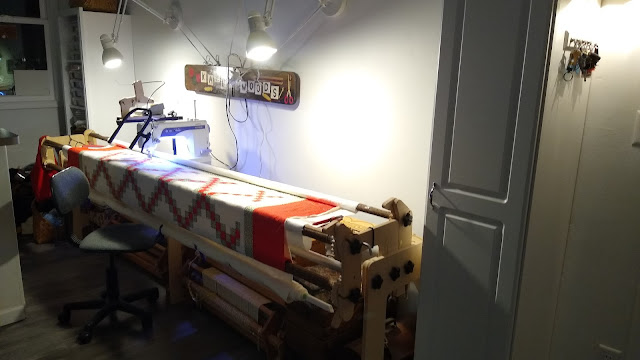 I'm not sure if I posted any pictures of the completed she shed in use. Here are some shots I took today:

West wall and stairs up to the kitchen 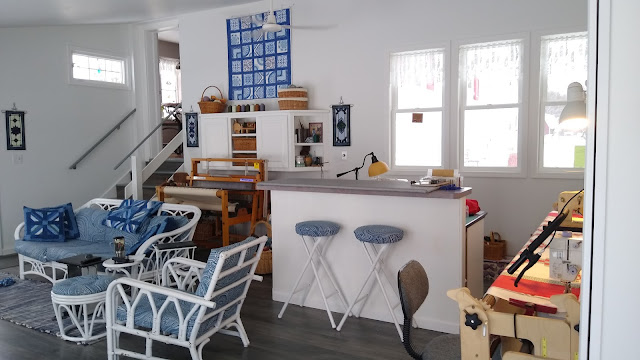 East and South walls with new corner closet,
the tv and the fireplace. 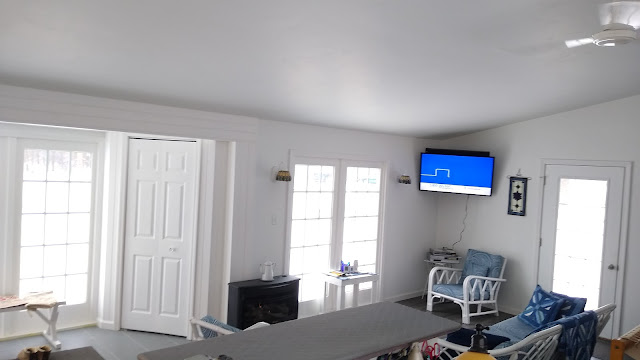 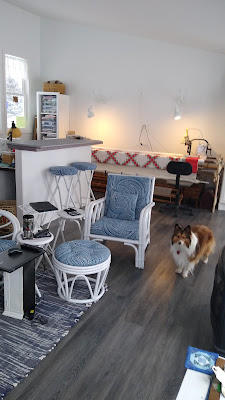 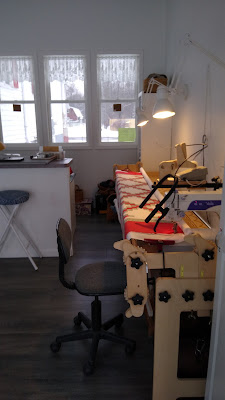 West wall with my weaving stuff and sewing island 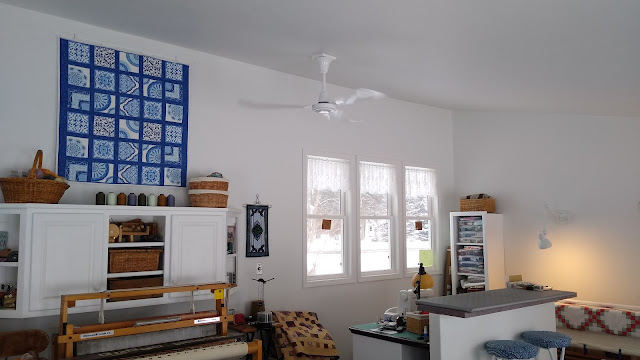 and out the windows
to the Big Backyard
with snow snow snow~! 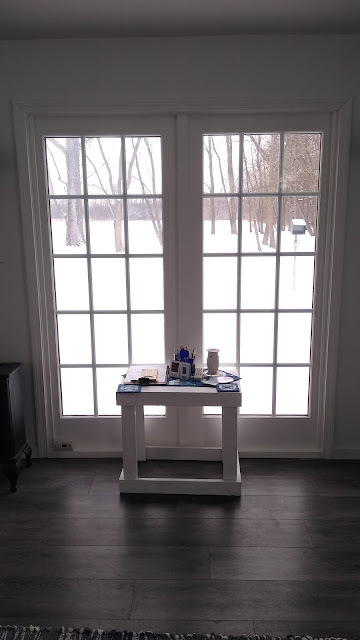 and more to come!