Despite cancer now receiving the focus of our family's attention, the coronavirus pandemic (downgraded to an epidemic and now, I think, even losing that status) rages on, dominating our media. This week, Governor Cooper announced his preference that public schools open only with Plan B (hybrid in-person and virtual) or Plan C (virtual only) due to the perceived risk of coronavirus to asymptomatic children--because, in any case, if one is sick with anything, one should stay home. The only good I think might have come out of this viral nightmare is much greater social pressure for sick people to stay home: Over the years I've seen so many sick kids--even feverish, even vomiting a few hours prior, even medicated to mask symptoms--brought to church and homeschool events.

The Mecklenburg County school board quickly held its meeting and announced that it is doing a Plan B-plus Plan which looks to me remarkably like Plan C. Over the first two weeks of school, groups of children will come to school for a brief orientation, then will go home for an all-virtual year until further notice. That makes it sound like the school intends for in-person instruction at some point, but that is hard for me to imagine given that fall will usher in illnesses of all sorts resuming as per usual.

Reading this tremendous amount of statistical analysis gives one much to think about actual risks: Covid 19 — What the Data Tells Us.

Daycare centers for essential workers (which is a huge number of families) have remained open during this entire lockdown, yet I haven't heard of outbreak crises. European and Asian schools have already been open and studies are showing no problematic outbreaks. The studies coming out everywhere are that children are not strong vectors of coronavirus, nor are people of any age who are asymptomatic. We should be celebrating the scientific information we are learning as we go.

Parents who can afford otherwise this fall will do otherwise. On my Facebook feed, I'm seeing many advertisements by private schools whose new ad slogans are, "In-person instruction five days per week . . . starting this fall!" In my neighborhood, parents immediately began organizing to find an office space and hire tutors and teachers to provide face-to-face instruction and help for several set hours daily this academic year.

Inquiries into legitimate homeschooling are through the roof in our state. The state website for Non-Public Education actually crashed with folks trying to submit their Notices of Intent to homeschool. I'm seeing email inquiries daily to the various homeschooling groups I am in.

Of course, families who cannot hire nannies, tutors, teachers, or enroll their kids in private schools, or do their own homeschooling will experience the education gap widening. How will that foreseeable result be used politically?

I'm so grateful that our family gets to keep on keepin' on and the only hurdle I have to figure out is how to homeschool while continuing Thomas's cancer treatments. Back in early spring, I had already fully planned the five grades of school I will be teaching, so all the work that remains over the summer is to write out the lesson plans for the books and curriculum I chose. Then I have to figure out what to cut or delay because I have to face that I cannot teach a full load in the same manner I used to with Thomas's current condition.

I pray for the masses of children who have a right to a full education and aren't going to be getting it. 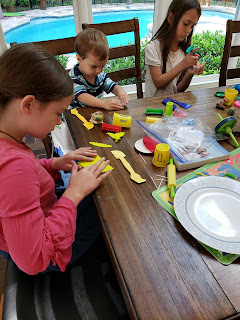 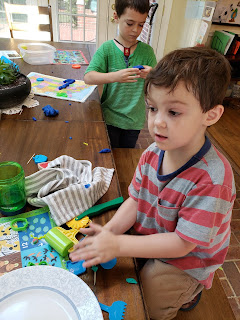 We got out of the house this week and visited sunflowers in an open field, free of potential illnesses. Click here.

A frog (no picture) and a mouse (wet and shivering below) were rescued from the pool this week. That reminds me of, "A Froggie Went a Courtin' ". . . 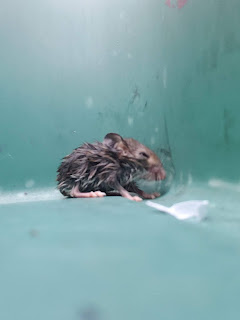 Thomas had his second weekly clinic day: the good news is that there are signs that the chemotherapy is working! Click here.

Our neighborhood experienced a dramatic manhunt this week. An apparently mentally ill registered sex offender had been released after a seven-year prison sentence just one month and had made our neighborhood his daily haunt. We know his name, we have his mug shot and rap sheet, and the police were very well aware of who he was. Our neighborhood Facebook page has been flooded with hundreds of comments describing his behavior and photographs of daily sightings. He had a daily path through our neighborhood, along which route he would expose himself to women and children, hide in bushes, try to talk to kids, and then would hang out at the drug store and gas station outside our neighborhood, before crossing back through the neighborhood later. We think he was probably living in a homeless camp at the Greenway (in the woods). It is sad to me to think of a human living this degraded life, knowing he was somebody's bouncing baby boy 35 years ago, but he is also a danger to us.

He had been seen also at our private neighborhood pool, which is right behind our home. Many residents reported that he would walk right through their private back yards.

You can imagine that the families here went into RED ALERT. The police were being called numerous times daily when this man was sighted but he would get away. Like many other families, our children were all given serious talks and then not allowed to play outdoors, not even in our back yard, without a parent in direct supervision. Dad explained to our kids growing up on a military base and the levels of readiness, DEFCON Delta, Charlie, Bravo, and Alpha . . . We are in DEFCON Bravo! The garage door is to be shut during the day and doors, not left ajar as normal, but closed and locked!

On Friday, several different neighbors out in cars spotted the gentleman and called 911, then jointly trailed him until police got there. The fellow was arrested walking through our neighborhood without his pants on.

We hope he gets the help he needs. We hope he was actually put into custody somewhere instead of arrested, booked, and released with a distant court date and nothing but homelessness and exposing himself to use up his time. We are very glad that all that happened was that many of our neighborhood's residents got a view of something they never wanted to see: it could have been much worse.

Our family certainly did not need this personal experience to form the opinion that we do not want our hero police to be defunded as per the current political climate! Since this man was clearly mentally unstable, should an unarmed social worker have been sent to help him? I'm not going to describe his rap sheet on a family blog but he served seven years for a crime with a minor, and he got out and immediately exposed himself to many little kids in our neighborhood. But he's mentally ill, walking around in socks and clearly not right. Is that a police call for a crime or is that a social worker issue, to which some nice lady should show up so that she can convince him to come avail himself of some community programs? I think it was very appropriate for a strong police man to take him away and that it would be a good idea for a social worker to visit him when he is safely behind bars and likely getting the medication he needs.

In anticipation of Thomas's birthday on Sunday, a big bouquet of balloons arrived from his aunt and uncle! 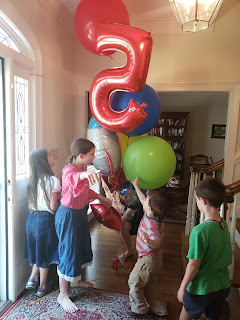 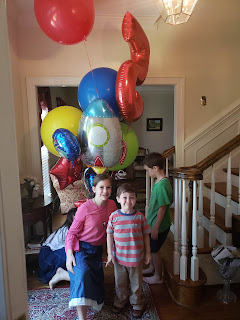 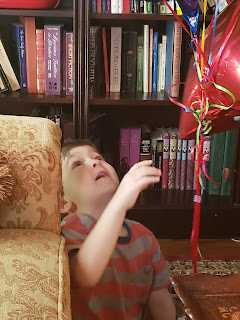 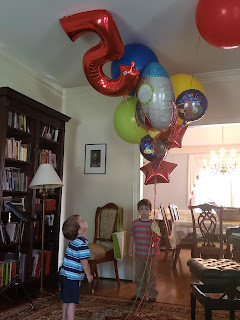 For more 7 Quick Takes Friday, check out This Ain't the Lyceum.